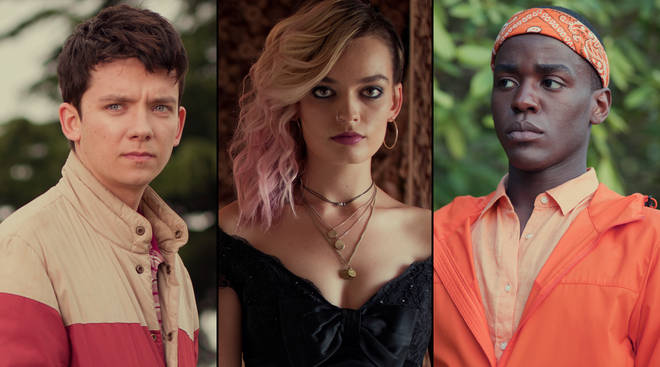 SEX EDUCATION Review: Why Netflix’s New Gem is a Must-Watch

This hilarious yet emotional TV series about the son of a sex therapist reworks every trope of its genre and ends up being about so much more than just sex. Sex Education premiered on Netflix January the 11th.

Maeve and Aimee in an episode of Sex Education; photograph: Sam Taylor/Netflix

Right from the beginning, creator Laurie Nunn makes the viewers well aware that they are not watching a traditional coming-of-age comedy. In the first scene of the show we see Adam, the school bully and headmaster’s son, having sex with his girlfriend Aimee. While Aimee seems to be enjoying the act — or as we later learn, pretends to be — Adam fakes an orgasm.

The plot twist occurs when Otis fortuitously finds himself with “cool girl” Maeve and Adam, who has taken three pills of Viagra. Unexpectedly, Adam starts sharing his insecurities about the excessive size of his penis and being the headmaster’s son. Otis calms him down and even though the advice he gives eventually doesn’t turn out to be too useful to Adam, Maeve realises how good Otis is at giving sex advice and she suggests they team up and offer sex therapy at school.

Otis and Eric in a scene of Sex Education; photograph: John Hall/Netflix

In every episode of Sex Education Otis deals with a new teenage problem —  from the girl who is desperate to have sex at all costs to the school bully who tries to save herself when a photo of her vagina circulates online — as he discovers the skills he unconsciously developed in years of observing his mother’s clients.

The series is both heart-warming and powerful thanks to the brilliant script and acting. The characters themselves surpass the stereotypes they could have easily been. Maeve, elevated to iconic status in school by an inaccurate reputation of her sexuality, is not just sexy and rebellious. She is smart, reads Virginia Woolf and likes “complex female characters.” She has learnt to be independent because of her dysfunctional family’s absence but her vulnerabilities are also all on display. A particularly touching scene is the speech she gives Otis about how she got her reputation, the pain it has brought her and how “no one deserves to be shamed”.

Sex Education is funny, progressive, and has a moral lesson too: accepting who we are even if it means suffering. In a world of bullies where everyone’s social status is compared to a food chain and where judgment and jealousy rule, everyone wants to be normal because being special makes you a target. But, as always, Otis has an answer to every problem. As he tells Adam in the very first episode: “you need to own your own narrative, do not let it control you.”