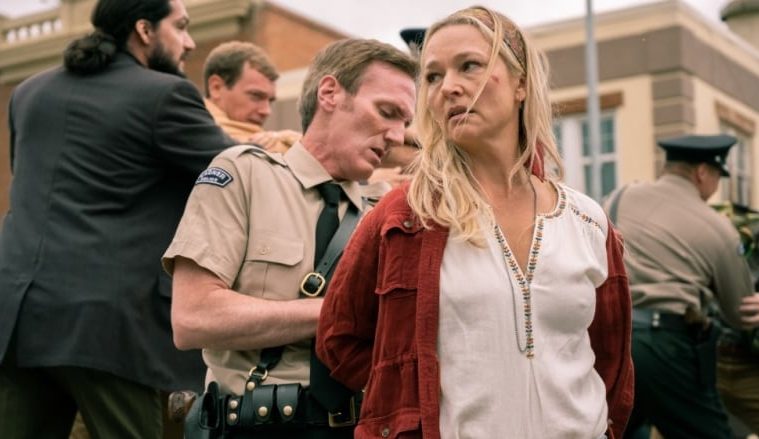 True Blood’s Star Stephen Moyer is back! Only this time Moyer is playing a ruthless CIA agent named Vern Lang in the Fortunate Son. CBC’s highly anticipated original drama series set in the 1960s, where violence, racial tension, and corruption exceed all bounds. Join us as Stephen sits down with HOLR, for an exclusive interview. But first, let’s take a look at what we can expect from Season One which premiered on January 8th on CBC.

The Struggle To Escape

Inspired by a true story, Fortunate Son follows the United States government’s menacing pursuit to suppress the anti-war movement in 1968. Where one mother, named Ruby Howard, played by Kari Matchett, is willing to put it all on the line as a bold activist. Despite the fear and imminent threat to her family.

Ruby’s deeply held convictions push her to risk everything smuggling men from the U.S across the Canadian border. Her goal is to protect those looking to escape, mandatory drafts during the Vietnam war. Placing a significant target on her back and those that she loves.

Stephen Moyer plays Vern Lang, a cut-throat CIA agent that will stop at nothing to protect the interests of the United States government.

Clip Featuring: Darren Mann (“Travis Hunter”) and Stephen Moyer (“Vern Lang”) After he accidentally shot fellow American officers while in battle in Vietnam, Travis Hunter has a meeting with mysterious CIA agent Vern Lang, who makes him an offer he can’t refuse.

Lang is onto Ruby, and it’s only a matter of time until he causes some severe damage to her cause. Stephen gives HOLR an exclusive look at the complexity behind his character Lang, and how this production brings something new to this historical narrative.

The political and social landscape of today is just as polarizing, as it once was in 1968. Which is why the Fortunate Son poses to be such a gripping series. Stephen Moyer sheds light on the actual events that took place during the Vietnam war. It remains clear the Fortunate Son, in many ways, shares the same themes of today- a divided nation, with social upheaval. Yet still, an America full of hope, striving for change.

Clip Featuring: Protests against the Vietnam War that escalate in violence,
including the arrest of Ruby Howard (Kari Matchett).

You can watch Fortunate Son every Wednesday at 9 p.m. (9:30NT) on CBC and CBC Gem

Click Here to watch the all-new episode of CBC’s Fortunate Son for free!